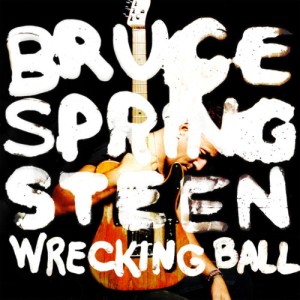 Two excellent, folk-accented releases in the past couple of weeks, the first from Bruce Springsteen and the second from Anaïs Mitchell; each touching on the reality of life in modern America, a nation that’s currently experiencing a crisis of introspection demonstrated in an overwhelming feeling of having lost its soul.

Springsteen’s Wrecking Ball is up there with his best albums, a soaring, searing blend of styles with lyrics that ring out like an Old Testament prophet and samples from Pentecostal preachers in the background. Opening with We Take Care of our Own – which, appropriating Bush-era rhetoric to make a powerfully ironic statement about a land where the Boss finds himself “stumbling on good hearts turned to stone | The road of good intentions… dry as a bone” to a musical backing that reminds you why Arcade Fire ripped him off, makes it clear that this is going to be an album that goes for the jugular. By the end of the song you’re left aware of the hollowness of those words as well as the brutal truth that they contain, although as some reviewers have pointed out, it’s could well be his most misunderstood song since Born in the USA.

Elsewhere, there’s more than a whiff of the folk tradition in the Celtic accents of Shackled and Drawn and Death to my Hometown, the jaunty Irish backing of the latter perfectly summing up the attitude of the people Springsteen is writing about – celebrating even while the world goes to hell. In fact, given the subject matter, the whole album is remarkably upbeat, but that’s what makes it one of Springsteen’s best – he always preferred to be on the side of the underdog anyway, railing against injustice. And what a rallying cry; when on the title track Bruce howls,

he once again sounds like the voice of a nation. Not defeated, but angry, and with good right to be, too.

But if anything, it’s the elegiac moments, those remembrances of the life that once was and now has been lost, which are the most powerful. The gospel-flavoured Rocky Ground is haunting; opening with a call to “rise up, shepherd, rise up | Your flock has roamed far from the hills” in a world where “the stars have faded, the sky is still | The angels are shouting ‘Glory Hallelujah!’” and breaking down in to a mournful rap about how,

Where you once had faith now there’s only doubt;
You pray for guidance, only silence now meets your prayer
The morning breaks, you awake but no-one’s there

to culminate in a cry of “oh, a new day’s come.” The Biblical rhetoric, alongside the patriotic echoes shot through the album, only serves to show how far the world has drifted from that original vision. The same can be said for Land of Hope and Dreams, an image of a faraway land where all things will be made right; as a result, the saxophone solo from the late, great Clarence Clemons, one his very last recordings, is spine-tinglingly perfect in its timing and placement.

It’s not a perfect album, and some of the slower moments drag a little. However, it’s the sound of Springsteen getting his voice back, in all of its power and passion and fury, and that can only be a good thing.

Less apocalyptic, but just as t

houghtful, is Anaïs Mitchell’s Young Man in America, whose cover features her father, the ‘young man’ of the title. Mitchell’s voice is incredible, but it’s the lyrical content that really sets her apart here – again there are Biblical images of shepherds and references to the story of Abraham shot through the whole thing. “Your highways are a wilderland | Look upon your children, wandering in the woods!” she commands in the opening track Wilderland. Still better is the title track, which makes the mistake of being so good that it threatens to eclipse what’s on offer elsewhere. It’s the angriest that I’ve ever heard Mitchell, telling of how

Only to end up finding herself asserting, “daddy, daddy, | Gonna wish you never had me”. By comparison, the rest of the album seems deceptively mellow. Shepherd has its images of a coming storm, but even so depicts a seemingly pastoral scene, casting Mitchell in the role of a poet-prophet. “We both have labouring to do”, her pregnant mother tells her father in the song, with a metaphorical significance about gender roles that Mitchell sensibly doesn’t pass a verdict on, but nonetheless the whole thing sounds like it’s come from another time and it’s a beautiful thing for that reason. Tailor is a song about changing for the one you love, apparently a simple thing but lifted by Mitchell’s treatment of it – she manages to sound both diffident and heartbroken at the same time. But it’s the close of it that really cuts, with Mitchell stating, “now that he’s gone away | There isn’t anyone to say if I’m a diamond, or a dime a dozen” and asking herself, “no-one taught me how to cry | Who am I? Who am I?”

The upbeat Venus sees the classical goddess “come down in a cloud machine”, a woman “who don’t need no-one, don’t need no-one to hold her hand” – a glorious inner monologue from a woman looking for love and the truth that’s concealed in poetry. Elsewhere, He Did is written from the perspective of a child sitting at her father’s feet and hearing stories of what preceded her birth. It’s another song about identity and trying to work out who you are in the context of family, nation and history, and the whole album is suffused with that sense of memory shared – shared collectively between herself and her parents, and owned by both. The implication behind that being that, of course, we too have to claim it. Musically it’s gorgeous, but it also takes some work to untangle, like all of the best folk albums, with its echoes of 70s artists (old-style Dylan, and even Carly Simon) slipping in alongside classical folk instruments – I swear there’s a lute in there somewhere.

That’s why when the album closes with Anaïs Mitchell “down on the docks… Watching you watching the ships coming into the harbour”, the image that she suggests is of a woman who’s now standing on her own two feet. It’s never quite clear if she’s imagining her parents meeting or if she’s talking about herself at this point, but that’s never really the issue anyway. The suggestion is that every generation has to do this, has to be able and willing to piece together an identity from the evidence that they’ve been given in order to work out their way in the world.

In her own way, then, it’s the sound of a women who is, even four albums in, just starting out on what’s going to be a thoroughly exciting career. I can’t help feeling that it’s an album that I’ll still be listening to (and trying to work out) a few years down the line, and I’m certainly not complaining about that either.

Listen up! The mighty Praxis Bold have just dropped their first EP, Oh Sacred Surreal, over at Bandcamp, and if you call yourself a lover of music in any way, shape or form, you need to listen to it.

Which, in fact, you can do below.

It’s a beautiful thing. Dreamy melodies swirling around what is described as “alternative bodacious indie jazz synth”, which pretty much tells you all that you need to know really.

Listen to it above and then buy it, noting as you do how much the opening chords of Possibility sound like the theme from Black Books.