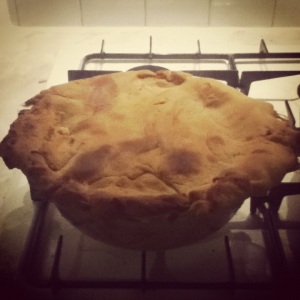 I like the idea of a wedding pie. It’s a very British thing to do, and given Jamie Oliver’s talent for pastry art (check out the crown on the top of it) it’s entirely possible that one day, somebody in Britain will choose to propose using this pie. Although I suppose technically that will make it an ‘engagement pie’ instead.

Anyway, this isn’t a “wedding pie” per se; it’s a pie in commemoration of the wedding of Prince William and Kate Middleton. I think Jamie Oliver was slightly offended that he didn’t get an invite after the wedding given that he did create a pie that most of the nation is likely to eat, but there you go.

This is a bit fiddly – it’s probably going to take you about three hours to make, minimum. I made it in about two hours fifteen as I misread the recipe, and it wasn’t unbearable, but the filling could have done with a little more time to thicken. I used shop bought pastry, and I am less skilled at pastry art than Jamie Oliver, so didn’t even manage to make a heart out of pastry for the top (it was a romantic pie, you see), but perhaps you’ll do better than I did. It is worth saying, though, that it was totally delicious.

I’m not sure how legal it is to post the recipe over here – I’d imagine that Jamie’s legal team are a bit more strident than some – so I’ll paraphrase as best I can. It’s in Jamie’s Great Britain, though, and on the website here.

So for the filling for a pie to feed six you’ll need:

I bought pastry, but here’s Jamie’s recipe if you can be bothered to make your own (it’s probably better):

You’ll need a big casserole style dish with a lid. Mix your herbs, butter and olive oil on a high heat, chop your onions roughly and add them to the melted mixture and then put the beef shin in, stirring it until it’s brown and there’s some liquid in there. After that, add tomato puree, stock, flour and Guinness, let it come together and then and simmer for an hour on a low heat with a lid on.

This was where I went wrong. Add the pearl barley, put the lid back on and simmer for another hour – I didn’t, so I only simmered for twenty minutes, the gravy didn’t thicken and the barley was still a bit chewy. Then take the lid off, simmer for another 30 minutes, and stir in the mustard and Worcestershire sauce, finely grating in the cheese. Jamie spoons off the oil – I didn’t have a film of oil, but then I didn’t simmer it long enough, did I? Then season it to taste.

If you’re making pastry, then while the stew is ticking away, put the flour, suet and butter into a bowl with a good pinch of salt. Use your thumbs and forefingers to rub the butter into the flour until it resembles cornflake shapes. Lightly stir in 125ml of cold water, then use your hands to gently pat and push it together into a rough dough. Do not overwork it. Wrap the dough in clingfilm and put into the fridge until needed.

Preheat your oven to 180°C/350°F/gas 4, spoon your meaty mixture into a pie dish (not too deep – like 4cm apparently) and then roll your pastry out, letting it hang over the edges. If you’re feeling ambitious, you can fold it back over and make patterns; mine went soggy and I panicked. And then Jamie eggwashes the top, which gives the whole thing a lovely glaze – if i did this again I’d probably try it. But there you go.

So, give it a shot, and let me know how you get on!