I’m off to work at a couple of festivals for the next couple of weeks, so if you’re around at New Wine or Soul Survivor Week B this year then the offer of a cup of coffee stands – as it has for the past few years, in fact. Give me a ring or drop me a message on the blog if you’re interested.

I’ll do my best to update this while I’m in Shepton Mallet, but they’re likely to be a pretty busy experience so I’m making no promises… 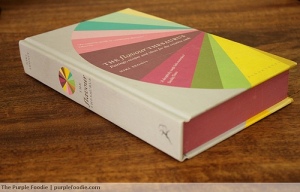 Probably one of the easiest recipes I’ve ever come across, as promised by Nikki Segnit in her marvellous The Flavour Thesaurus, but when I cooked it for friends the other night it was so good that I swore I’d post it on here. I’m serious when I say it’s easy, though, and you have to trust that it works as well as I say it does.

You’ll need 6-8 red or yellow peppers, de-seeded and roughly chopped, and some chicken thighs – ideally with the skin on and the bone still in. Get yourself a medium-sized saucepan with a lid on, chuck the whole lot in on a medium heat and stir for 10 minutes to stop it sticking. After that the peppers start to release their juices, so put the lid on and you can leave it for another 30-40 minutes until you’ve got a whole load of sweet stock.

Considering it’s from two ingredients alone, it’s an amazingly delicious and complex sauce. Segnit doesn’t add anything to it, but I added a teaspoon of smoked paprika and some black pepper.

Serve with crusty bread, rice or couscous according to occasion, and some salad on the side (we had it with ciabatta) and eat with friends.

Man, I love Stornoway. Partly because they write songs about Cowley Road – and I live on Cowley Road – but also because, despite being pretty weedy and not that cool, when they open their mouths and sing, whole rooms fall silent.

It’s a mark of real talent, and so I’m particularly excited about the fact that they’re coming back to their hometown of Oxford in September (supported by The Epstein, no less) and parading a whole bunch of new songs. I was late to the party on Stornoway and only saw them live last year, but when I did I realised instantly why everyone had been telling me to go for so long. They are a truly remarkable live band.

>> I WANT THE WORLD TO STOP

I just got back to work after a pretty manic week’s holiday.

This is a fitting anthem for a first Monday morning back, I think:

I’ve been slightly sceptical about new Belle and Sebastian, having grown up on the pure stuff, but I do like the cheery sixties feel about their latest album Write about Love – when it manages to avoid being twee, at least.

Anybody buy the new album and have any thoughts to share?

I’m currently reading Jonathan Safran Foer’s magnificent book Eating Animals, which is a wonderful mixture of memoir, philosophy textbook and polemic. The book is actually in favour of vegetarianism – but, playing devil’s advocate, a chapter or two in, Foer writes this:

“Can’t we get over our sentimentality? Dogs are plentiful, good for you, easy to cook, and tasty, and eating them is vastly more reasonable than going through all the trouble of processing them into protein bits to become the food for other species that become our food.

For those already convinced, here’s a classic Filipino recipe. I haven’t tried it myself, but sometimes you can read a recipe and just know.”

The recipe is as follows. It caught my eye because I’ve been at a couple of weddings this week.

(For the record, neither of them served this.)

First, kill a medium-sized dog, then burn off the fur over a hot fire. Carefully remove the skin while still warm and set aside for later (may be used in other recipes). Cut meat into 1” cubes. Marinate meat in mixture of vinegar, peppercorn, salt, and garlic for two hours. Fry meat in oil using a large wok over an open fire, then add onions and chopped pineapple and sauté until tender. Pour in tomato sauce and boiling water, add green pepper, bay leaf and Tabasco. Cover and simmer over warm coals until meal is tender. Blend in puree of dog’s liver and cook for an additional 5-7 minutes.

I’m planning on cooking it later this week. Who’s in?

Stolen from Yotam Ottolenghi‘s cookbook Plenty, which I bought for my parents awhile back and have been waiting to have a go with for some time. This recipe actually called for pumpkin wedges, but we didn’t have any, so butternut squash serves as a pretty good substitute. It’s also incredibly easy.

However – and I say this from bitter experience – if you don’t own a decent knife, don’t even go near butternut squash. It’s a scary vegetable, and you’ll just end up slicing holes in your arms. Don’t go there.

700g Butternut Squash (or Pumpkin, if you prefer) with the skin left on

Incredibly simple. Get your oven on Gas Mark 5 (190 celsius), cut your butternut squash into 1cm thick slices and put them on a baking tray lined with greaseproof paper.

Some days just don’t go in your favour. Like when you wake up on the first day of your week-long holiday from work after a dinner party the night before and remember that you have to be at a wedding. In Southampton. And it’s raining that kind of hard, grey, soul-sapping rain that the Brits seem to do so well.

So you drag yourself out of the house and lug a week’s worth of clothes to the station in a rucksack, dressed in a suit and balancing a copy of The Times beneath your arm and underneath your umbrella, only to be told by the least friendly customer service woman ever that the ticketing system has changed and having not printed your ticket off, it is now worthless.

And then you catch yourself questioning whether it’s really necessary to be so defensive when you are behind glass, and as a result have no need to be. And also whether you are becoming a thug without noticing, the sort of person who frightens women in ticket booths in train stations.

But in the end, none of that matters. Because of the Pret a Manger croissant in your bag.

Pret a Manger croissants have 9.0g of saturated fat. That’s the equivalent of at least one entire meal, or two Mars Bars, in one item. If you’re a woman, that would be basically half your saturated fat consumption for the day. The chocolate ones are even better, at 14.3g of saturated fat.

However. They are every bit as good as you would expect.

I have a friend who asserted once that anything starts to taste good if you chuck enough butter at it (even seafood), and I think she has a point. Because Pret’s croissants taste like sunshine in pastry form. They are warm, comforting, and make even the most grim of grey days seem brighter. They are the antidote to train rage.

Sure, I can appreciate that Pret a Manger may be destroying independent retailers, another evil multi-national chain that is making high streets across the world identical to one another. In the long run, they are probably a bad thing.

That said, I would never dare protest against them. They’d only bring round free pastries, and then I wouldn’t stand a chance.